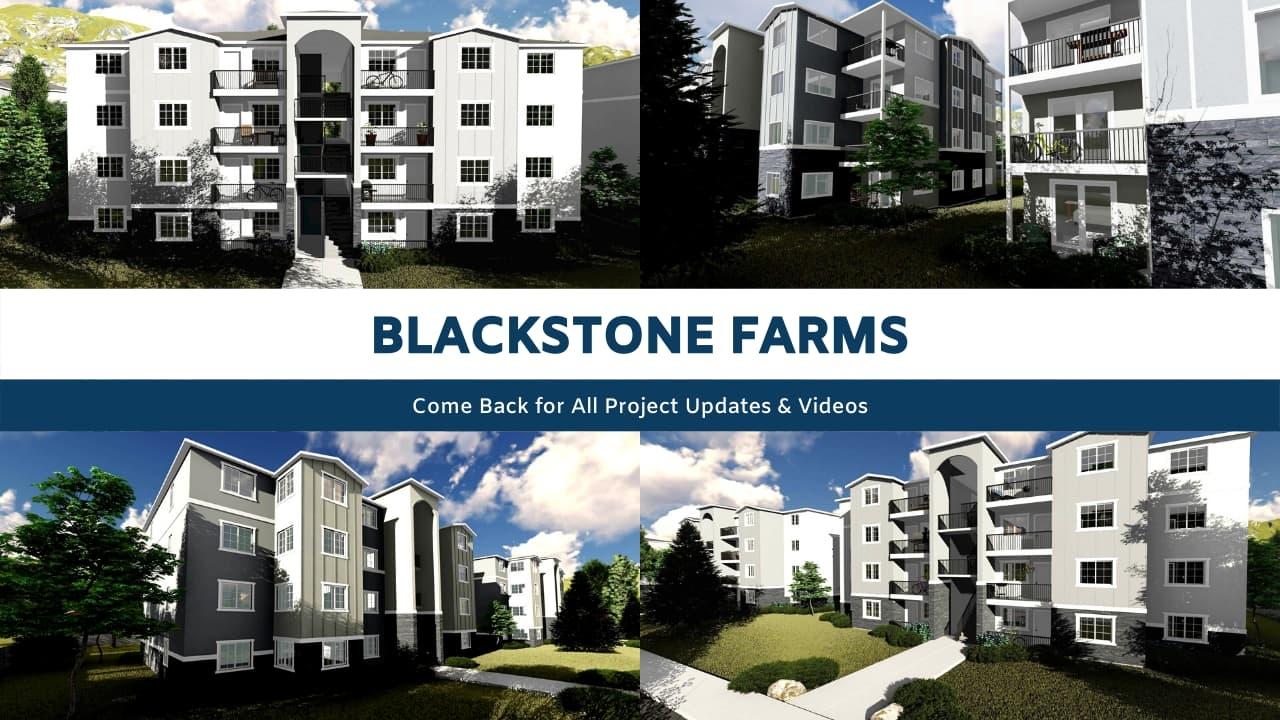 All four sixteen-plex buildings on the south side of the project are completed and have received their certificates of occupancy. In spite of the winter months, leasing traffic has been steady!

Units to the north (on the east side) are getting final inspections, which will continue westward as they work up to the curve in the road. The last buildings in the project are still finishing exterior work and the last certificates of occupancy are expected to be received by early April.

If you have specific questions about your units, please reach out to your designated FIG agent.

Exterior construction is well underway on the majority of the buildings at Blackstone Farms. Tenants are already moving into units on the South East side of the project, as the solid rental market isn't dissuading people from moving into units that haven't been landscaped yet.

The last phase of Blackstone Farms is now framed and roofed, with only windows remaining for installation in the very last building—before trades will begin work on the building's interior. Lastly, moving toward the entrance of the project, you'll see that construction and grading are in progress!

Blackstone Farms is transforming faster than it ever has!

We had a meeting with the builder team this week and they reported that all units are expected to deliver within the 12-month timeline.

Interior finish is underway in Phase 1. Various stages of drywall and exterior are being completed in Phases 2-3. The remaining phases are all in various stages of framing, electrical, plumbing, etc.

Blackstone's sister project, Pineridge Farms (same floorplan about 7 miles away), is leasing very well right now. If leasing hits similar in Blackstone Farms, we expect initial leases to hit proforma estimates and stabilize nicely. The new Provo city park one block north of Blackstone Farms will be a great draw for young families in the area, which make up a solid portion of the demographic in Provo.

If you have any questions, please don't hesitate to reach out to your designated FIG agent.

Blackstone Farms has been successfully progressing despite record construction costs and material shortages. At this point, the construction team is projecting all units will deliver within their 12-month schedule!

Phase 1 is almost done--exterior work and interior finishes are well underway. Subsequent phases fall 2-3 months behind the phase before it based on their closing dates. You can see in the drone video that each of these phases is in different stages of framing, foundations, etc.

You can watch the latest Blackstone Farms drone video below.

We're happy to see construction moving full speed ahead at Blackstone Farms! Across the industry, concrete shortages have been a challenge. To combat this, our construction team has been using their own machinery to make concrete on-site...

You'll notice in the video that in the first batch of buildings, the bulk of framing is done. Shortages in roof trusses have slowed things down a little, but we're making our way through them and shifting subs between buildings as new trusses continue to arrive.

In spite of a late start, construction is projected to finish within the 12-month timeframe. The bulk of the foundations and framing are either done or in process.

We've finished up the main public road that goes through the center of Blackstone Farms, and have now graded and prepped the edges of the project for parking lot paving. Footing prep is just starting on the first few buildings. We expect underground plumbing and foundations to be completed sometime in December. A lot of lumber will be coming up out of the ground on our next update!

We've begun aggressively closing construction loans in Blackstone Farms after a lot of delays with land acquisition and plat modifications. The main road through Blackstone is now paved with curb and gutter, and underground plumbing is underway on the first few buildings! The plan is to pushing forward on this project and get as many foundations in the ground before winter as we can. This fourplex development is our first-ever Opportunity Zone project and we're thrilled to see things moving forward!

FIG Investment Agent, Sherida Zenger, visits FIG's newest project in Provo, Utah, Blackstone Farms. These will be new construction fourplexes in a stacked-flat floorplan just down the road from Brigham Young University. Provo is approx. 45 minutes south of Salt Lake City and has been a strong center for growth and business in the county.

While there's not much to see other than a bunch of snow, there's definitely a lot to be excited about! With Blackstone Farms, we have a rare opportunity to get into a brand new multiunit in Southeast Provo.

Currently, this property and surrounding areas will have more of an "industrial feel" but don't let that fool you. This project is found inside an Opportunity Zone, and with the announcement of the Brigham Young Universities' new Medical School (down the street by the East Bay golf course) this area is likely to change in big ways.

We are already starting to see some of these changes, making this a prime location for investors and future tenants once completed.