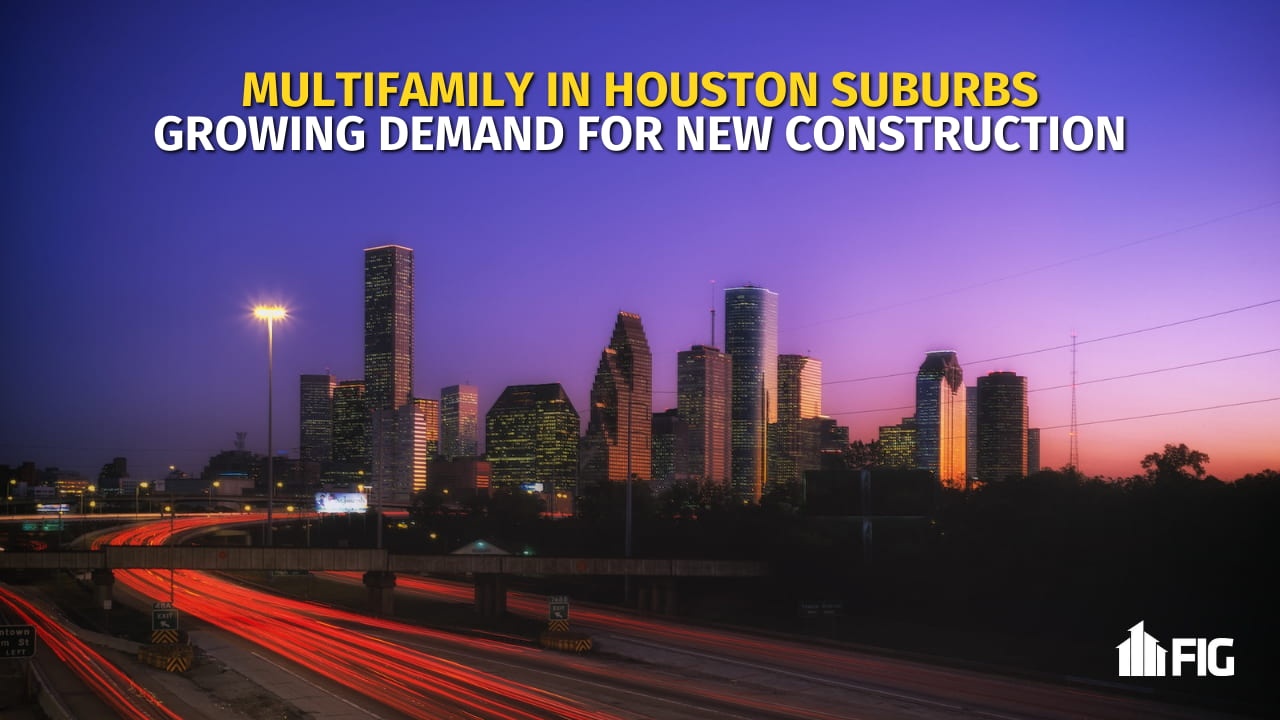 In January of this year, the Houston metro area reported a record-breaking increase in single-family home sales. The Houston Association of Realtors reported that the number of homes sold increased by 27.7% compared to January 2020. This comes alongside a reported 13.6% year-over-year decline in new listings.

The outer suburbs surrounding the Houston metro have seen a huge surge in demand in the last 12 months. In part due to this lack of supply in dense urban areas, and an increasing desire to leave the crowded atmosphere that is downtown.

It's not just the single-family market that has seen a huge uptick in demand. Suburban multifamily properties throughout the Houston area have grown in popularity as well. Overall growth to the area and a promising work environment have solidified leasing activity and continued rent growth. Bisnow.com says this, "indicates a shift in renters looking for bigger apartments at a more affordable price, as well as access to more outdoor amenities."

All of these trends lean in favor of new construction master-planned communities popping up just outside of Houston. A lot of would-be-tenants are looking for the benefits of a managed community with extensive amenities like a pool, clubhouse, gym, etc.

"Multifamily developers, already betting on Houston’s expanding population, are increasingly examining the potential for more product in suburbia. Rising multifamily rental values in Houston’s suburbs over the past year have offered a more cheery outlook for developers than Class-A multifamily in Houston’s urban core, which is generally considered overbuilt." - Bisnow.com

"Average apartment rents across Houston were $1,110 in January 2021, down 0.4% from a year prior, according to the latest report from RENTCafé. In contrast, suburban areas experienced rent growth in 2020. Howard Hughes Corp.’s master-planned community The Woodlands had the highest multifamily rents in the city in January, averaging $1,493 — a 2% increase from a year prior. Pearland rents averaged $1,359 in January, up 1.1% from the previous year. Missouri City, Sugar Land, Katy, Friendswood, Spring, Stafford, League City, Rosenberg and Conroe all showed rents above the Houston average in January, despite their distance from the 610 Loop."

The Move into Houston's Suburbs

Crystal Bledsoe, national multifamily asset manager for Howard Hughes Corp., said the two largest groups of multifamily tenants have been empty nesters and millennials. Both of those groups tend to gravitate toward an affordable all-in-one community where they can tap into both work and play.

"Amenities are the biggest draw that master-planned developers use to attract tenants from urban areas... miles of walking and biking trails, retail and restaurants, good schools, hospitals, and medical offices, along with a plethora of employers in the area."

The Texas business climate has been drawing in a lot of corporate relocations over the last few years. Home sales show that growth has been pushing away from the cities' high land/construction prices and into nearby suburbs. Multifamily investors are catching on to this and build-to-rent communities are becoming more common.

“The population in Texas is growing. And so I think there's going to be demand for people who may be moving from other states or other areas looking to live in an apartment before purchasing a home. So we're still very bullish on that, even though there are a lot of single-family homes being built. We do think there's going to be demand.” - Ashley Zubizarreta, Allied Orion Group Investments