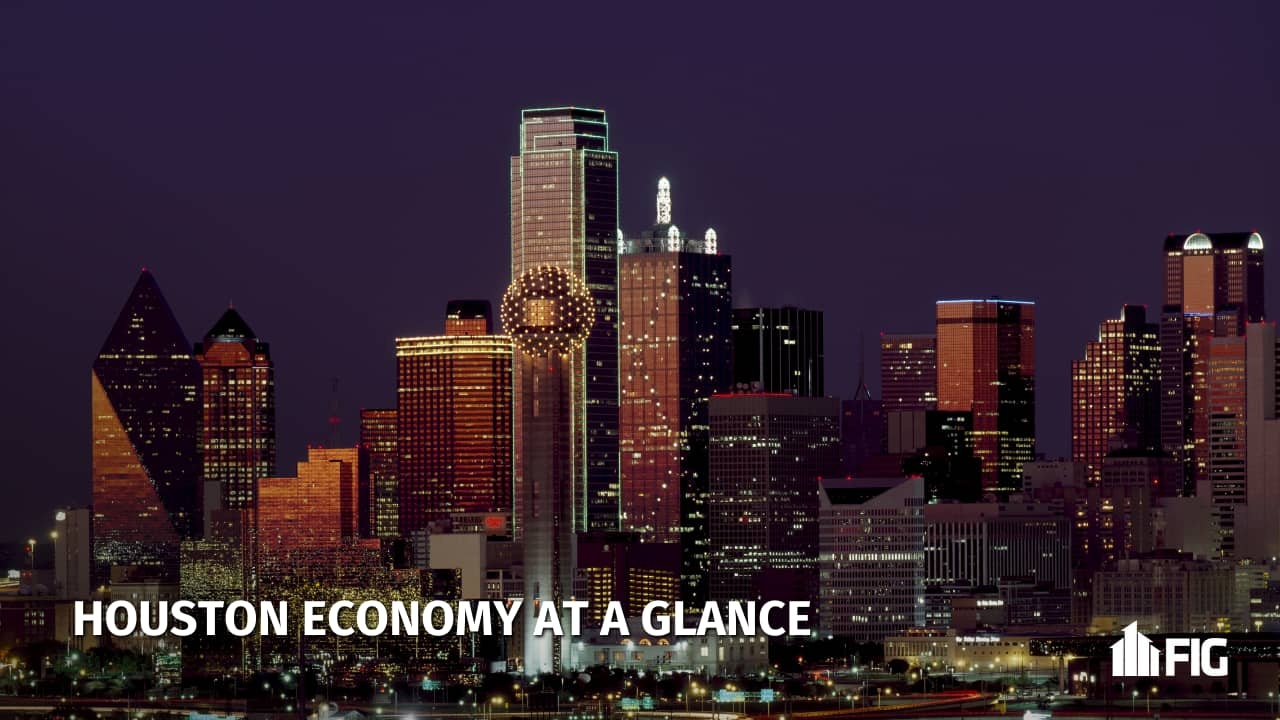 Houston Economy At A Glance

FIG is thrilled to be breaking into the Houston housing market with the Mills Road development underway and a new 200 unit project planned near Katy, TX. Houston is a big deal, a ripe environment for real estate investing. It's the most populous city in Texas and features a strong economy with many big business headquarters located within its city limits. Recently, the Greater Houston Partnership published an excellent market report entitled "The Economy At A Glance." Below is the complete content of that report as we consider its findings to be very insightful on what the next year's economic trend will bring.

Economy At A Glance

"Better Times Ahead — The Houston metro area added 18,400 jobs in October bringing total nonfarm employment to 3,022,800 not seasonally adjusted, according to the Texas Workforce Commission (TWC). The reported job growth is higher than the 25-year average of 10,300 net new jobs for October but in line with the five-year average of 18,500. 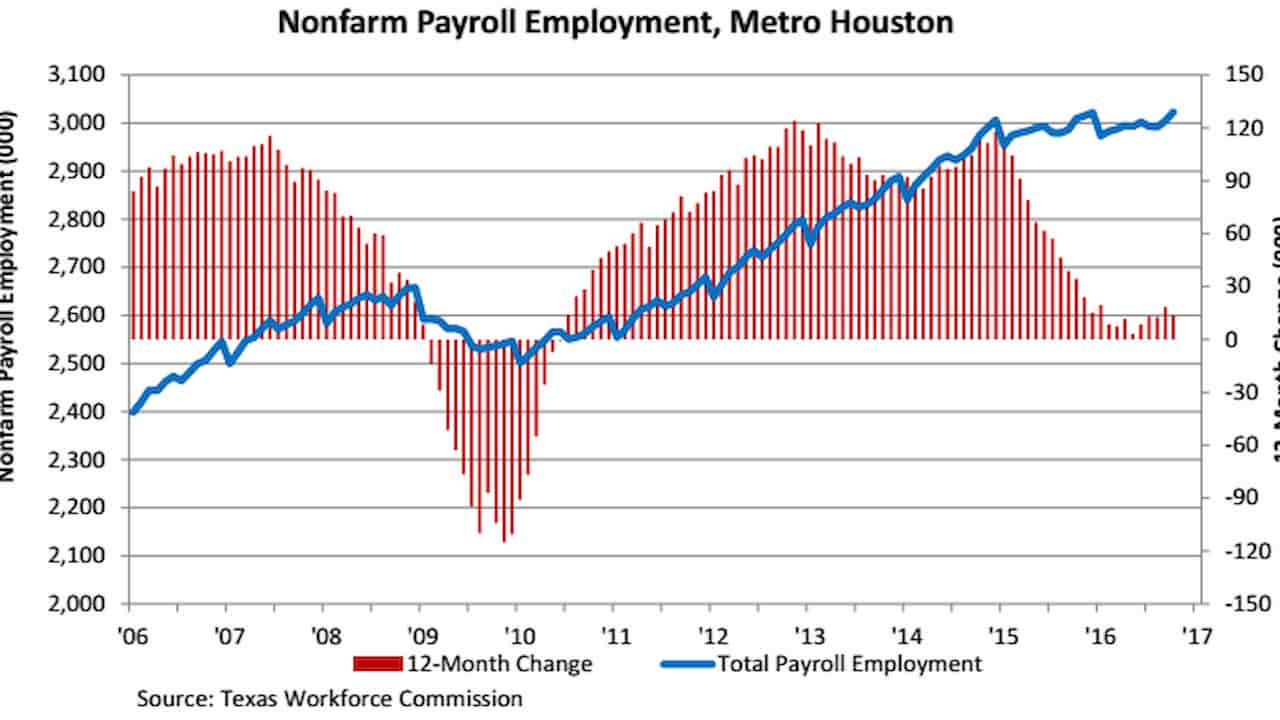 In October, Houston benefited from strong growth in government (+9,800 jobs), retail trade (+4,000), and manufacturing (+2,100). The government has added an average of 6,500 jobs over the past 25 years and 8,000 jobs over the previous five years, so the sector’s most recent gains are higher than normal, but still reasonable. The growth in retail trade is expected given the sector’s seasonal hiring for the holidays. Manufacturing posted its strongest monthly gain since the 2,300 jobs added in June ’14. This increase is welcome after the sector experienced monthly cuts between 2,000 and 3,000 jobs in ’15 and the first half of ’16.

Job losses occurred in leisure and hospitality (-3,800), mining and logging (-500), and professional, scientific, and technical services (-200). The drop in leisure and hospitality is not alarming given the typical seasonal shifts in the sector. Losses in mining and logging (i.e., upstream energy) and professional, scientific, and technical services (e.g., engineering) are still expected as oil prices have not been sustained at a high enough level that encourages significant hiring.

Mark Your Calendar — On December 9, the Partnership will host the 2017 Houston Region Economic Outlook and address the issues of energy, construction, and job growth for next year.The event begins at 10 a.m. with a panel of experts from the energy, health care, finance and real estate industries sharing their insights into Houston’s economy. KHOU-11 anchor Shern-Min Chow will moderate the discussion. The panelists:

Hollub is the panel’s energy expert. Occidental has operations in the U.S., Middle East, and Latin America. The Fortune 500 company relocated its headquarters to Houston in ’14 and is the leading acreage holder and largest operator and producer of oil in the Permian Basin.

Those attending the morning session will receive a copy of Houston Economic Highlights, 60 pages of insights into local economic and demographic trends over the past 10 years. A copy of the Highlights publication distributed at last year’s event can be found here. The luncheon portion of the event convenes at noon. Patrick Jankowski, the Partnership’s Senior Vice President of Research, will present the Partnership’s employment forecast for ’17. (Click here to see the ’16 forecast.)

Dr. Kevin Swift, chief economist, and managing director at the American Chemistry Council, will deliver the keynote address. Dr. Swift is responsible for economic analyses dealing with policy issues and the business environment.

That would bring expected cuts to 1.8 million barrels. The agreement, to be revisited again in six months, will take effect on January 1, 2017. A committee consisting of Algeria, Kuwait, and Venezuela along with two non-OPEC members will monitor compliance. The markets quickly reacted to the news. The spot price of light, sweet crude traded on the NYMEX closed $4 higher than it opened. To put that in perspective, Texas produces approximately 90 million barrels of crude in a typical month. The $4 price bump adds another $360 million in value to that production. Granted, that’s an oversimplification. Most crude trades under long-term contracts and won’t be impacted immediately. But the jump in prices does allow firms to lock in higher prices for future production. Wall Street also responded by bidding up share prices of energy-related firms.

In the short run, global inventories will continue to build. The U.S. Energy Information Administration estimates OECD inventories at just shy of 3.1 billion barrels, about a 65-day supply. Significant inventory drawdowns won’t begin until the second half of ’17. 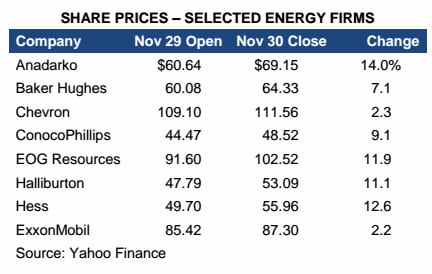 Building Permits — City of Houston building permits totaled $5.8 billion for the first ten months of ’16, down 14.4 percent from $6.8 billion in the same period last year, according to the City’s Department of Public Works & Engineering Planning & Development Services.

Inflation — The cost of consumer goods and services as measured by the Consumer Price Index for All Urban Consumers (CPI-U) rose 1.6 percent nationwide from October ’15 to October ’16, according to the U.S. Bureau of Labor Statistics. Core inflation (all items less the volatile food and energy categories) increased 2.1 percent since October ’15.

Purchasing Managers Index — The Houston Purchasing Managers Index (PMI), a short- term leading indicator for regional production, registered 51.1 in October, signaling economic expansion in metro Houston for the first month since December ’14, according to the latest report from the Institute for Supply Management-Houston (ISM-Houston). The PMI has risen steadily since June, last registering 48.5 in September.

Vehicle Sales — Houston-area auto dealers sold 25,228 vehicles in October, a 17.0 percent decrease from the 30,408 sold in October the previous year, according to TexAuto Facts, published by InfoNation, Inc. of Sugar Land. October marks the tenth consecutive month of  over-the-year declines in vehicle sales in Houston."

Patrick Jankowski, Josh Pherigo, and Jenny Philip contributed to this issue of Houston: The Economy at a Glance.