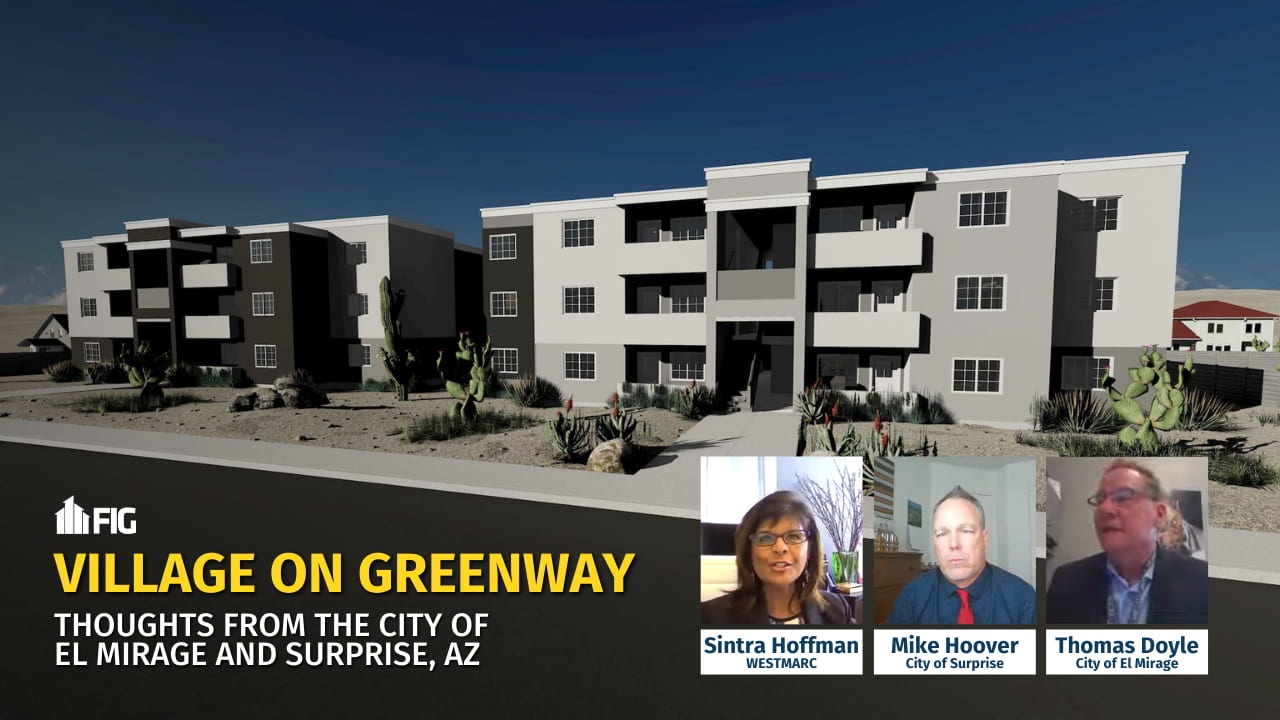 "This Plaza to the left here (on the West side of the project) is the Mirage oasis. That particular area...take a look at the traffic counts. 18,000 on Greenway 17,000 on Dysart. One of the challenges we had was we couldn't get enough vehicles into that area. We have some openings in that particular plaza. 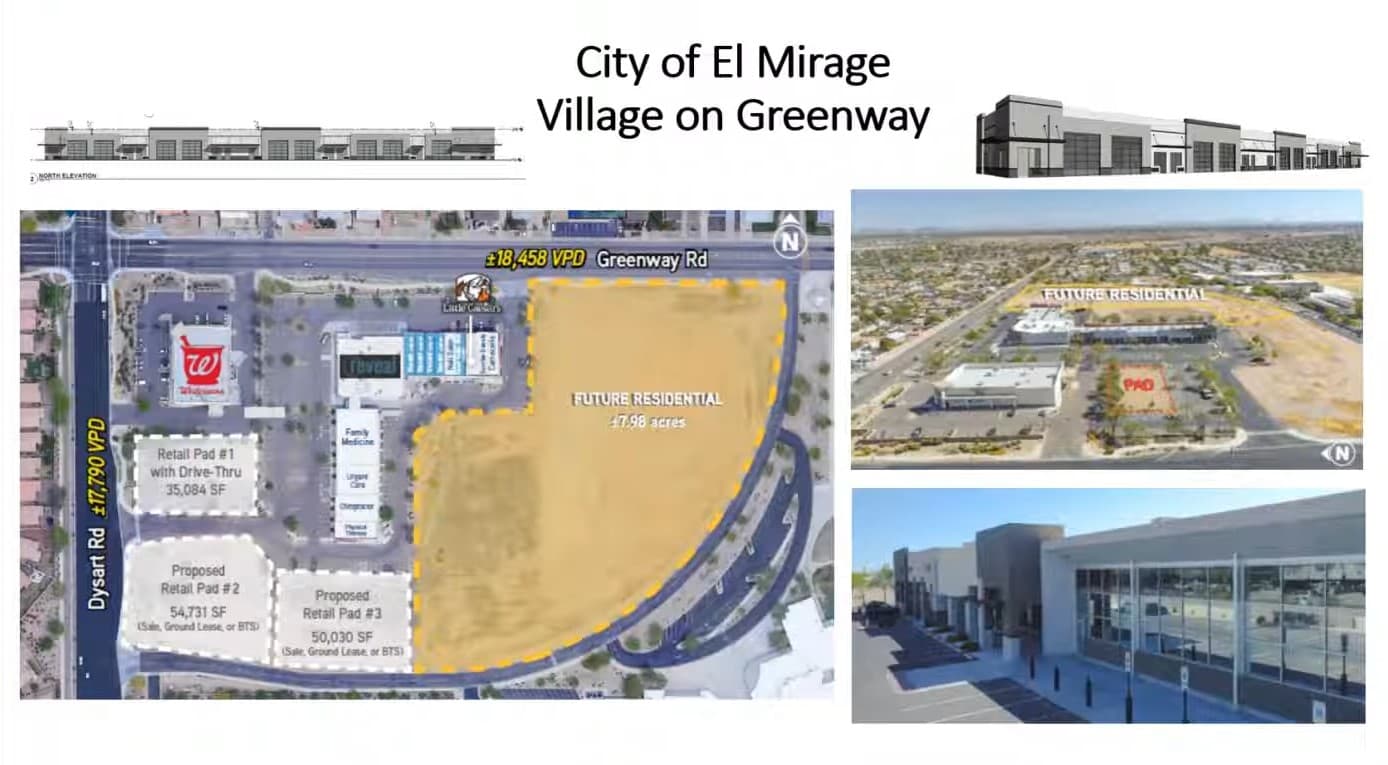 "With the Village on Greenway, I can tell you that the tenants in the Mirage Oasis are absolutely thrilled to be able to have so many people that would be able to walk in and visit some of those particular [stores]. Density was one of the big issues that we had in this area, so we're really thrilled about [FIG's Greenway project].

"I also wanted to point out this retail [Southwest side of the project]...That's another development. It's called Cabin Commercial. There are 2 10k+ square foot buildings, it's a flex space. They're going to break them down into 1k each.

"So it's just the combination of the Village on Greenway, and this retail pad #3 is really going to help support the business community in that particular area.

"El Mirage has, for the longest time, [been] considered a bedroom community. Most of the people, like a lot of West Valley cities, [are] commuting down to Central Phoenix or the East Valley to work. Copperwing Logistics Center in the southern part of the city is becoming a major employment center. We are we're running nine development projects right now we've got a couple of really strong prospects [and are] looking at jobs in the 5k+ plus job range here probably within the next two or three years.

Having this development is perfect timing. The Village on Greenway is also our only three-story building in El Mirage, Arizona. So we're thrilled that we're going up, as well as out...we're just ecstatic.

On behalf of the mayor, thank you for considering El Mirage."

"Steve [Olson] also mentioned about the special relationship they had with Surprise Elementary School, and they were really supportive and showed up at the planning and zoning meeting to show their full support with this.

I think overall, the coordination that was involved with this was really, really outstanding. Steve, thank you so much...I will certainly pass on to our engineering and building official, your kind regards concerning the level of service that the city provided to you."

"As you can imagine, [with] as much land as we still have here in the West Valley, whether it be Surprise or El Mirage—densification is still important when we're trying to drive retail as well.

"These types of projects (Village on Greenway) really allow us to better deliver services to specific areas. So I think it's important because we...had about an eight-year spell where we didn't have multifamily come into the community. So we're actually getting up to speed on what the significance of these types of projects can mean for certain areas...the potential to assist in the driving of amenities is one of them. And also utilization of certain parcels.

"...this isn't a perfect rectangle parcel. [FIG has a] design around the configuration of the site...it looks like a great utilization of a parcel that's enhancing that area. From my perspective, I want to say thank you...I want our viewers [to] be able to get a sense of the delivery of densification that we're talking about to this area."

"What I really like to see is...you have essential services with education, within walking distance. With the business park across the street, you now have the opportunity to potentially even ride your bike to work and have a quality of life that this product is going to deliver into that area [which] is lacking right now.

"When we're talking about these projects, it's not just the aesthetics of the projects, or how they're utilizing land that may be unique, but it's also the impact they're having on the local commerce, but also how it aids our ability to recruit more business."

"Most of you may know that I used to work for the City of Surprise many years ago...and I drove that route (past the Village on Greenway build site) every day to and from work. To drive it now and to see what's happening in that area, the products that are coming in, the services that are coming in, [and] now the residential.

"...I think this is going to be a tremendous project for that community. I think it is quite nice, actually....just looking at the way the landscape and the aesthetics have changed along Greenway is is very impressive. So [I'm] excited about this."