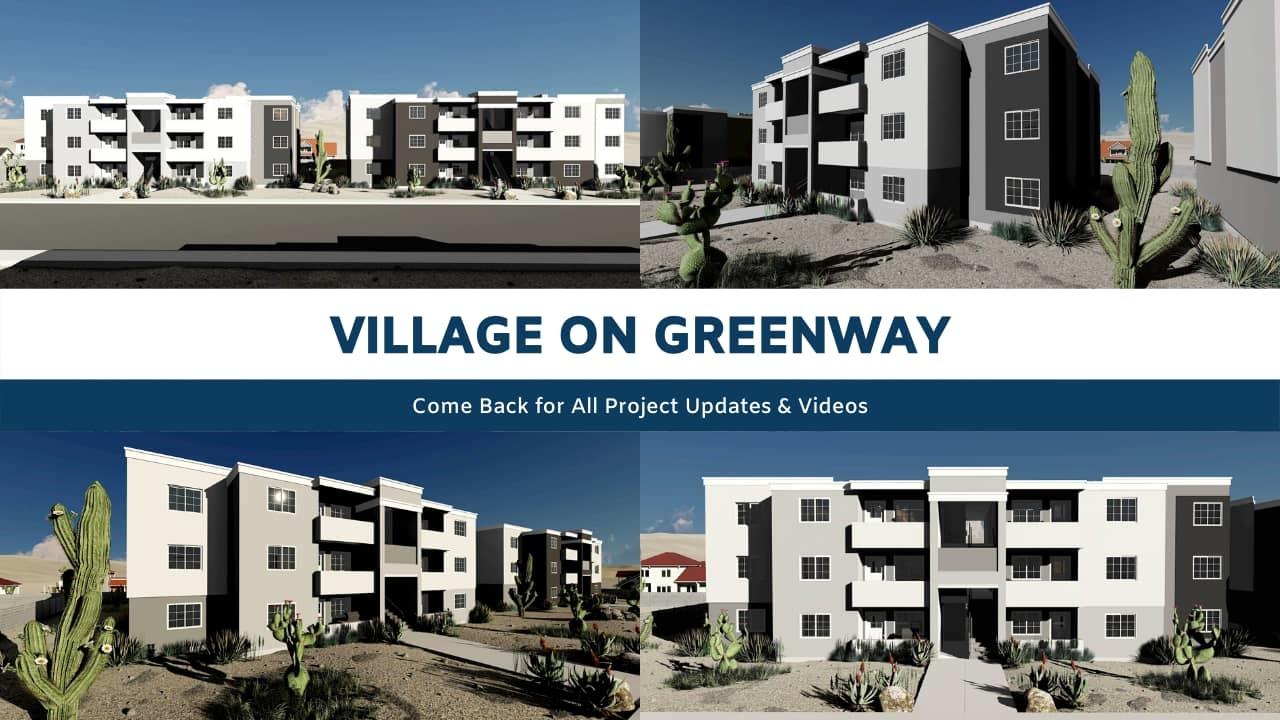 We're continuing to see steady progress at the Village on Greenway.

Until two weeks ago, there had been big delays in getting permanent power and asphalt to the construction site. We're happy to report that the south half of the site has now been paved. Additionally, transformers have now arrived and permanent power is now on!

Our latest schedule from the builder indicates that Buildings H and G (units 49-60) are scheduled to receive certificates of occupancy by Feb 15th, with rent-ready status to follow in early March.

Property management has begun moving through the waitlist of tenants that built up during construction. They've also begun pre-marketing efforts to add to that waitlist. While it's too early to tell, we're cautiously optimistic on leasing and rent levels!

In the coming weeks, you'll also start to see landscaping on the south side of the Village on Greenway. The concrete block wall along Greenway Rd is under construction as well.

C of O's are expected for Buildings E and I (units 33-48) in March/April. We'll continue to update you as we receive more clarity from the builder on their schedules.

It’s a race forward over at the Village on Greenway! The first two buildings are near completion, curb has been installed, and grading for asphalt is underway.

Certificates of Occupancy are expected in early January with units to be "rent ready" approx 10 days to 2 weeks thereafter. Each subsequent building is expected to deliver close to its twelve-month deadline.

Chase Leavitt and Sherida Zenger visited the Village on Greenway project this week in El Mirage, AZ to check up on construction progress.

Construction in the Village on Greenway continues to roll toward the north, with the project's first couple of buildings nearing completion on the exterior. The next few buildings are making progress in their framing, and several more are in the process of footings/foundation. If you look closely, you'll even see the clubhouse nearing completion!

Construction teams are almost through framing for Building 1 and windows have been installed. Building 2 is about halfway framed, and the foundations have been poured for Building 3 and the clubhouse!

The FIG team has continued to make its way through the rest of the project's construction closings. At the current pace, we expect all closings to be completed by mid-July.

What's a big benefit to building in Phoenix? The weather is great this time of year! FIG's Sherida Zenger just visited our Village on Greenway project and horizontal development has been completed. Utilities are also in place and building pads will be ready to go as soon as construction loans close.

Phase 1 has closed and is already under construction (you'll see partially framed buildings in the video below). Phase 2 closings are well underway, with six left to be completed by the first week in April. We'll continue closing loans as aggressively as possible, with all closings set for completion by July.

Quick update for Greenway investors. We're at the early stages of horizontal work and getting ready to put utilities in. We've flattened off a good portion of the project, especially on the southwest side of the project where the first couple buildings and triplexes are going to start to take shape over the next couple of months.

It's still early on, but things are moving along. Phases 1-2 close in November and December. As pointed out in the video, we're right next to some commercial buildings (CVS, Little Caesars, etc.) Then on the southeast side our neighbor is Surprise Elementary School.

Horizontal development is now well underway at the Village on Greenway in El Mirage, AZ! For those of you who have requested more info about this project over the last month, you can see in this video that the site has been cleared, with grading and utility installation in process. We’ve also recorded the final plat and are in the home stretch of recording the remaining state-required public reports. We expect this to be issued near the end of this month. Looking at our next steps, we expect vertical construction to start-up late October/early November!

FIG Investment Agent, Sherida Zenger, visits the construction site of one of our newest fourplex developments going up in El Mirage, Arizona.

The Village on Greenway project is right off of N Dysart Rd and W Greenway Rd in El Mirage, AZ. We've slated this entire project as a variety of two-bedroom units and a couple of one-bedroom units as well.

When you look at this build-to-rent community, you'll see a well-maintained development of apartment buildings, yet the entire project will be platted as triplexes. To an investor or bank, this will be a residential multifamily opportunity.

That's how it looks on the outside, but then the FIG team contains all of the fragmented ownership that's all kind of kept corralled by the HOA.

All in all, there are 60 triplexes within this project and 7 duplexes. The duplexes have a storage component with them with some garages that get rented out to tenants.

Village on Greenway will be right in front of Surprise Elementary School. The primary entrance is going to be off of Sunnyside Lane and it will be a gated entrance for tenants.

We'll be giving these tenants a swimming pool, playground, dog run, and some basic amenities, so they can feel like they have a community to live in. The project will also include a CMU wall with the gate we mentioned before. You'll also see a bunch of covered parking along the front rows, by the buildings as well.

A little insight on what the majority of floorplans will look like: These are two-bedroom units. The family rooms have a little balcony and we like to make sure each two bath unit has two full baths. We think that opens up to a much broader tenant base, provides flexibility, and takes the two-bed unit to a completely different level.

This project sits on about 8 acres and will have a total of 194 doors.

"Some of the things I wanted to mention, specifically, [with the] the City of El Mirage...I've been in the valley doing civil engineering for approximately 20 years. And I'd have to say, this was probably one of the best groups to work with—as far as helping us just get through the process.

"Even though this project is located in the city of El Mirage, it touches a lot of different organizations and a lot of different jurisdictions. We had to coordinate quite a bit with a school across the street. They were always very helpful.

"One of their concerns is, of course, the traffic going on on that street that they have. We coordinated how we're going to have a crosswalk so that it's safer for the students that need to cross the street, both going around the development, but also going into the development. We're hopeful that there's gonna be a lot of students/kids coming from our development that's going to be attending that school.

"Throughout the entire development process. [There's] been a lot of help on all sides. It's been great...it's been a great experience in the city of El Mirage. It's a great project. And like I said, for residential, it's going to be awesome in this area and for that community." - David Bohn, BFH Group