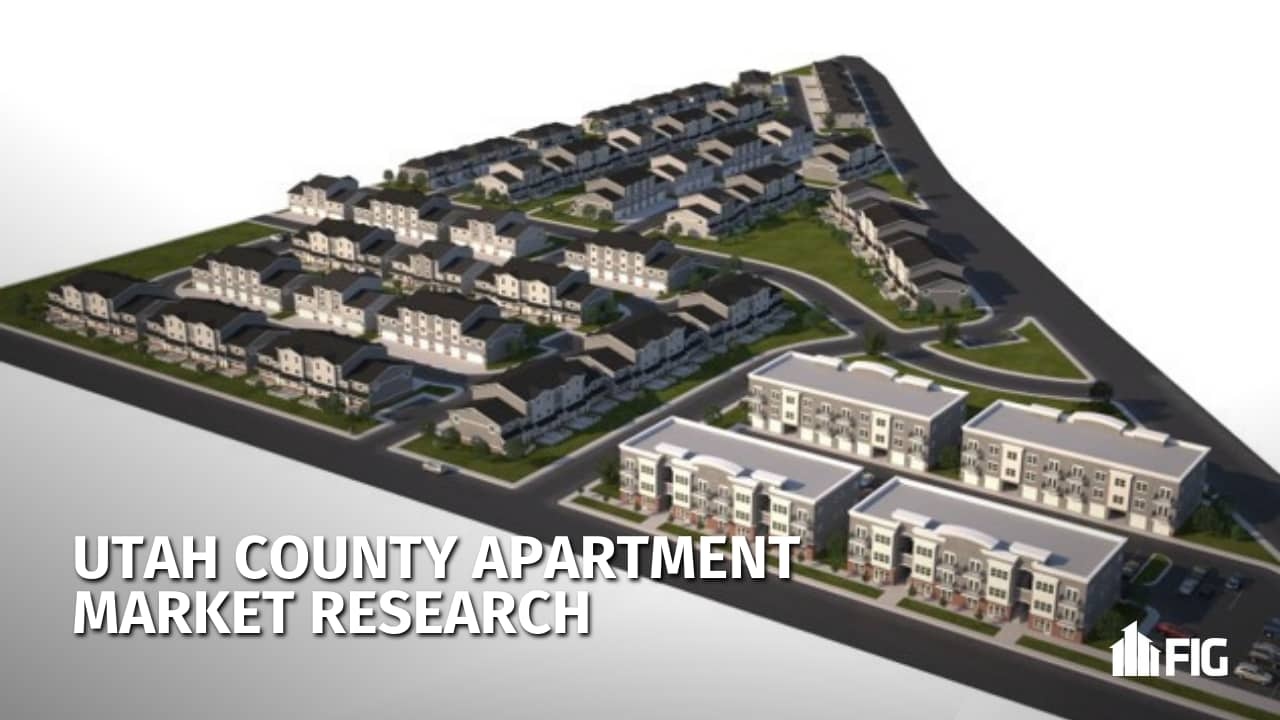 Cushman & Wakefield Commerce has published an apartment market report for Salt Lake County for the past fifteen years. Until now, Utah County had been left out of this type of research publication. But the recent surge in Utah County construction has made it very apparent that there's a need for more coverage in this area. So, recently Cushman & Wakefield rolled out their first-ever Utah County Apartment Market Report. Below is a summary of the findings in that excellent report.

There are an estimated 53,000 rental units in Utah County. A quarter of those qualifies as BYU-approved student housing. The rest are then attributed to the traditional rental market of single-person or family households. About half of these roughly 40,000 units are single-family homes, basement apartments, or duplexes. The other half is comprised of apartment communities of 3 to 350 units. For the purpose of their survey, Cushman & Wakefield included apartment communities of 25 or more units. This cross-section included nearly 6,000 apartment units, which is roughly 30% of the group of non-student communities with three or more units. This is considered to be a large and indicative sample.

The overall vacancy rate was 3.4% for all types of units in Utah County as of August. Rental rates are a bit high due to the recent surge in large, new, and thus high-priced apartment communities, inevitably tipping the average rent numbers towards the pricier end.

At $1,058 for all units, the Utah County figure is substantially higher than the Salt Lake County average sitting at only $949. However, when you look at the average cost per square foot, Utah County comes in below Salt Lake with $1.06 versus $1.09 respectively, which means you get more space for the money. This makes the average size of units 1,001 square feet, with average sizes ranging from 784 square feet for a one-bedroom to 1,316 square feet for a three-bedroom.

For example, the average rental rate in a small community (fewer than 100 units) is $967 for a two-bedroom, two-bath unit while it's large community counterpart (250 or more units) costs a 25% increase at $1,209. Smaller communities seem to have the advantage when it comes to vacancy rates. Small and mid-size communities (100 to 249 units) have an average vacancy rate of 2.6%, while large apartment communities come in at a much higher 5.1%.

Cushman & Wakefield then go on to analyze how the location of the community affects the rental rate and vacancy of units. The results show that the overall average rent is very similar for communities located north of Orem and those located in or south of Orem, $1,062 in the north as opposed to $1,055 in the south. What does differ significantly, however, is the size of these comparably priced units. The average square footage is 1,038 in the north compared to a much smaller 966 in the south. The regions also differ largely when it comes to vacancy rates with an overall rate of 4.3% in the north versus a noticeably smaller 2.7% in the south.

The apartment selection for renter families in Utah County has been historically slim. There used to be only a few large, high-quality apartment communities. And of these, most of them were aimed at the student market, not a destination for families. But huge changes have recently rippled through the scene. There hasn't been a student project developed since 2004. A shift is happening with demand. A whopping 3,600 new rental units have been given building permits in the past two years.

This blows the sixteen-year average of 512 out of the water. This new overwhelming need for rental real estate has spurred historic amounts of apartment development in the county. The past five years have produced 60% of all units developed in the last 20 years. That's seventeen market-rate projects with 3,738 units between 2011 and August 2016. That's high construction concentration across the county with the highest saturation in Orem, claiming 28% of all new units built since 1996.

Utah is now the fastest-growing state in the nation with growth expected to continue. And Utah County ranks with the highest population growth of the four Wasatch Front counties, the average annual growth rate at 3.1% since 2000. This is much higher than the state-wide average of 2% for the same period. So, Utah County seems to be the surging epicenter of this fastest-growing state with a population of 585,480 in 2015 comprised of roughly 153,000 households.

Population growth isn't the only category where Utah currently front-runs in the country. Utah also leads the nation in job growth, this success due in large part to the business-friendly environment. And again, it appears that Utah County is fueling the heart of this growth. The average annual growth rate has been 4.9% over the past five years. This is a hugely significant amount of growth. The County added nearly 13,400 jobs in 2015 bringing the grand total to 222,000. That's a sizable increase of 6.4% which then inversely worked to deflate the unemployment rate down to a very low 3.2%.

With the heart of the Silicon Slopes located in Lehi and it's slough of new jobs, it's no surprise that the professional, technical, and scientific services sector leads the county's job growth. This sector has inflated a mind-blowing 50% since 2008. Other sectors that have shown significant growth are information and health care. Overall since 2008, Utah County has increased 24.9% across all job sectors, leading all of the major counties.

Surging economic growth, consistently low vacancy rates, and the previous lack of large, high-quality family communities have all contributed to the big boom in apartment construction recently in Utah County. As of August 2016, there were eight apartment complexes, a total of 1,133 units, under construction in Utah County. Of those being built, a significant 56% are located in Orem, the most dense region of current construction.

There are currently eighteen apartment communities slated to be built in Utah County. In this projected setting, Vineyard now leads all cities in construction density with three proposed projects with a total of 916 units. Orem comes in second, still holding strong to its dense reputation, with four proposed projects totally 752 units. Of the eighteen pending projects, three of them are mega-developments which are probable for development after 2018. These communities will change the shape of the rental market and affect future market conditions.

The overall end-note from Cushman & Wakefield's report is that they project the rental market to continue in its stability over the next three years. They predict that the demand for rental properties in Utah County through 2018 will be 4,500 units, which is an extra 1,500 units each year.

When this figure is taken into consideration with the 4,700 unit projected increase in inventory, a rather solid picture develops of a well-balanced supply and demand situation. In this healthy rental climate, rental rates are expected to increase at 3-5% annually and vacancy rates will most likely stay below 5%. These numbers are supported by a continued expectation for both job growth and population increase. Utah is growing; there's no doubt about it. And the apartment market is primed to service the changing face of Utah County's housing community.