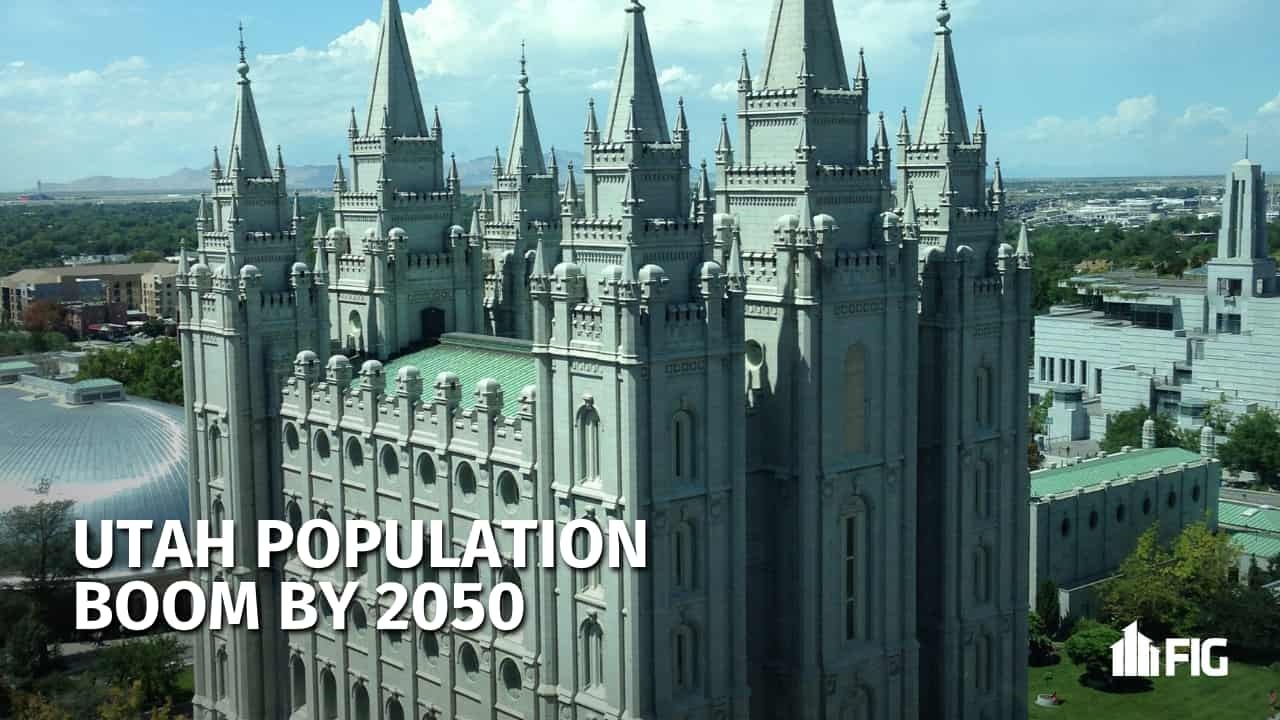 It's no secret Utah is one of the fastest-growing states in the nation with several of its cities among the fastest skyrocketing, too. Plus, projections confirm that this growth with continue estimates ranging from an increase of one million to two-and-a-half million Utah residents by 2050.

But who will these people be? Where will they live? Why will so many of them flock here? And what will be the impact of their presence? There is so much ongoing research happening now to determine answers to these questions and set about preparing for this projected massive increase in the future.

Remarkably, during this period of intense growth, Utah continues to consistently earn recognition for its livability, well-being, and economic development from sources across the board. Credit is given to efforts made in the 1990s to plan for this kind of growth and development of the Utah populous. The current "Your Utah, Your Future" initiative from Envision Utah by request of the Governor's Office seeks to revive that forward-thinking visioning.

Utah Foundation is collaborating in that effort and their report investigating these futuristic hypotheses serves as the major resource for this article. For their findings, Utah Foundation uses the 2.5 million population projection propagated by the Utah Governor's Office of Management and Budget (GOMB). But to give this mammoth number some context, it helps to consider that the state population has already nearly tripled since 1970 (1.1 million vs. an approximate 2.9 million in 2013). This growth has manifested a much more urban environment than the atmosphere of the Utah of yore. With more people pouring in, the state is expected to continue to urbanize and diversify.

WHERE the Population Will Pop Up

Areas that are already people-rich are expected to become more saturated. In 1970, only about 80% of the population of Utah lived in urban areas, which increased to 90.6% by 2010. This urbanizing trend is expected to continue due, in large part, to a major restriction of land available for private ownership. A whopping 80% of the space in the state is Federal, State or Tribal land which creates a major limitation to the land available for commercial and residential development.

What's more, there's a geographic straitjacket imposed on the Wasatch Front with the Great Salt Lake and Oquirrh mountains to the west and mountains blocking off the east. So, since much of the expected growth is likely to occur in cities along the Wasatch Front and considering that Salt Lake and Davis counties have little remaining land to grow into, the surrounding counties (Utah, Wasatch, Tooele, and Summit) can expect to compensate for the overflow their urban neighbors can't accommodate.

Utah County is expected to absorb the largest number of individuals, a huge 700,000 projected increase of residents. The smaller towns in the county will be subject to the most drastic changes in the population atmosphere. For example, the number of people in Vineyard is expected to multiply a mind-blowing ten times between 2010 and 2020. FIG participates in accommodating the ongoing growth in this region with two developments, Tucker Row and Edgewater, soon to be flush with happy, Vineyard renters.

Though heavily restrained in space, Salt Lake County is still projected to increase by 630,000, second only to Utah County for total new residents. This creates a rather tricky situation in Utah's most urban sector.

Special consideration and thoughtful planning will need to be taken in regards to the redevelopment and reuse of currently underutilized commercial land. One of the major solutions facing this potential crisis is a residential shift away from single-family homes to a more economical multifamily model alternative. In Salt Lake, too, FIG is on pace to provide new multi-unit options to the already-surging population, Payton's Quarry and The Overlook in Herriman, and Westridge in West Valley City.

WHO Will Inhabit Here

Now, what will this new boom in population look like? What age demographics are we looking at to make up this more people-saturated situation? Well in 2012, Utah was the youngest state in the country with over 50% of its population under the age of 30. Not only that, Utah also has the highest fertility rate in the nation. And this trend is expected to continue with the cultural emphasis on large families; however, GOMB projections predict that the big-picture dynamic will shift in the next 25 years and that the age group of those 60 and older will soon become the fastest-growing portion of the population.

By 2050, the group of those 65 or older is projected to double. This massive influx in this age range is going to impact education, health and community services, and the economy in a big way. This sector of growth is due to the aging Baby Boomer population, those born between 1946 and 1965. They were the largest generation until the Millennials hit the scene, those born between 1981 and 1995. Due to their large size, these two groups will continue to shape and necessitate the direction of society.

Millennials are already starting to impact the cultural face of our national society with their different ways of thinking and approaching things than those generations that came before them. There is a lot of ongoing research to define and quantify what these changes are and how they are affecting greater culture.

Some of the findings suggest that Millennials have a greater commitment to engaging in social impact. There is definitely a trend of lower religious participation and overall a more liberal political outlook coupled with less official affiliation with political parties. And, Millennials doubtlessly embrace and utilize new technology. It's also a more ethnically and racially diverse group characterized by a high optimism for the future. The trend of greater diversity has certainly been cited in Utah. Some predict that Utah will be comprised of 40% ethnic minorities by 2050. Kids growing up in coming years will know a much more urban and diverse Utah.

WHY People Want to Live Here

Changes and fluctuations in population and demographics are largely impacted by the economy and quality of life. Recently, Utah has been heralded by many sources for its economic performance and livability.

Salt Lake City was named by the Equality of Opportunity Project as the city where people would be most likely to achieve the American Dream because of a greater probability of intergenerational economic mobility based on available job opportunities, social capital, and access to alternative transportation services. Utah is a place where the next generation is set up to do better economically than the generation before them.

The Governor's Office of Economic Development has planning efforts in force that are intended to build upon existing successes and then continue to facilitate an environment for success going forward. The Utah Economic Development Plan implemented in 2010 focuses on diversifying the economy. In 2012, Hachman Index cited Utah as the 4th most diverse economy in the nation.

The implementation of "economic clusters" in the early 2000s brought much more national and international business to the state. The ideological goal has been to turn Utah into a "hypercompetitive region in focused industries." This emphasis is the mindset that continues today and helps account for the sustainable and robust current economy.

The positive economic climate of Utah works to retain the existing population and works to naturally recruit others for in-migration. Unemployment rates in Utah are historically low, ranked among the lowest in the nation in both 2013 and 2014.

And Utah keeps getting heralded over and over for its strong economy and high livability. The natural increase will keep infusing the population, but more and more in-migration will be seen in coming years as the word gets out on what it's like to live in Utah. If the economy can continue to expand and remain sustainable, the population boom will follow suit, a natural effect for the cause of a strong economy.