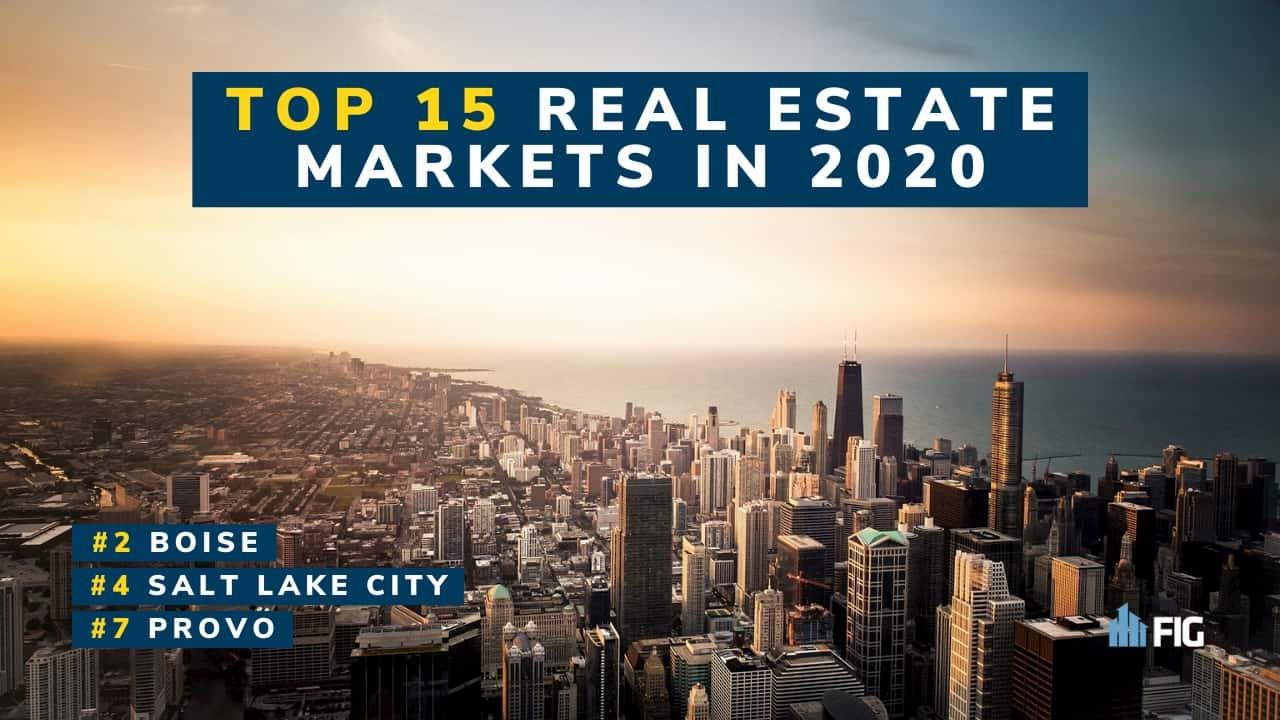 As we look back on the last five or so years, a growing job market, low rates, and a growing demand for housing has pushed the real estate market into a very comfortable position. While some discuss a potential market correction over the next few years (whether big or small) one thing is certain—demand for affordable housing has continued to outpace supply—causing home prices to continue their upward trend.
Today we'll look at the top 15 markets in 2020 according to the last 12 month trends in equity, consistency, and more... 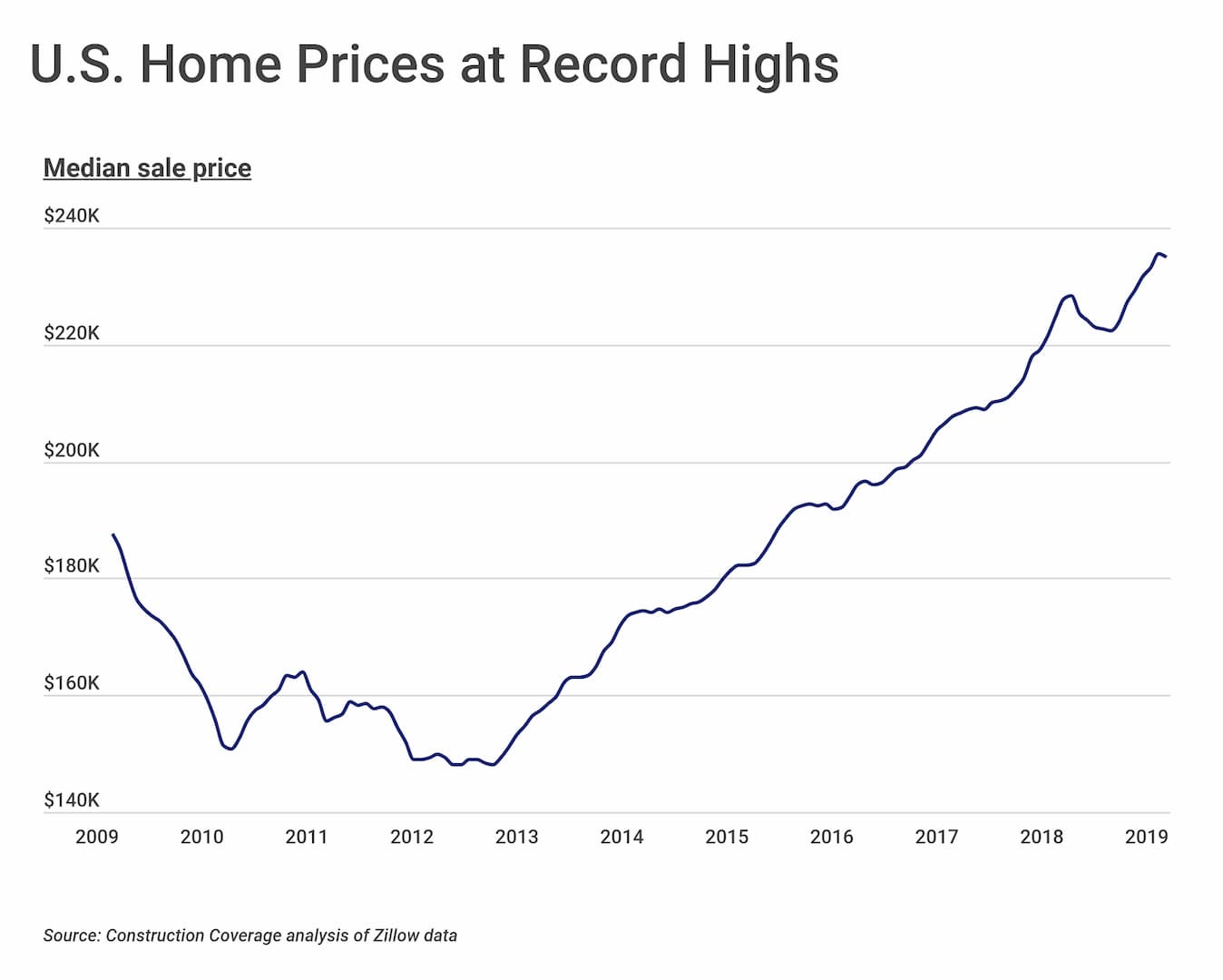 Despite millennials taking up "nearly 40%" of the home-buying market; we also see a growing trend of these buyers migrating into markets boasting a combination of economic stability and affordability (ie. Utah, Arizona, and Idaho).
Below is a quick look at 15 rising markets being built through this upcoming generation of home buyers. These areas show consistent equity growth, age of inventory through a growing local economy.
It's also important to note that as the necessity of affordable housing continues upward, many end up preferring the convenience and amenity-driven option of long-term multifamily. We've taken a look at this in the past in, Do Millennials Think it's Cheaper to Rent? 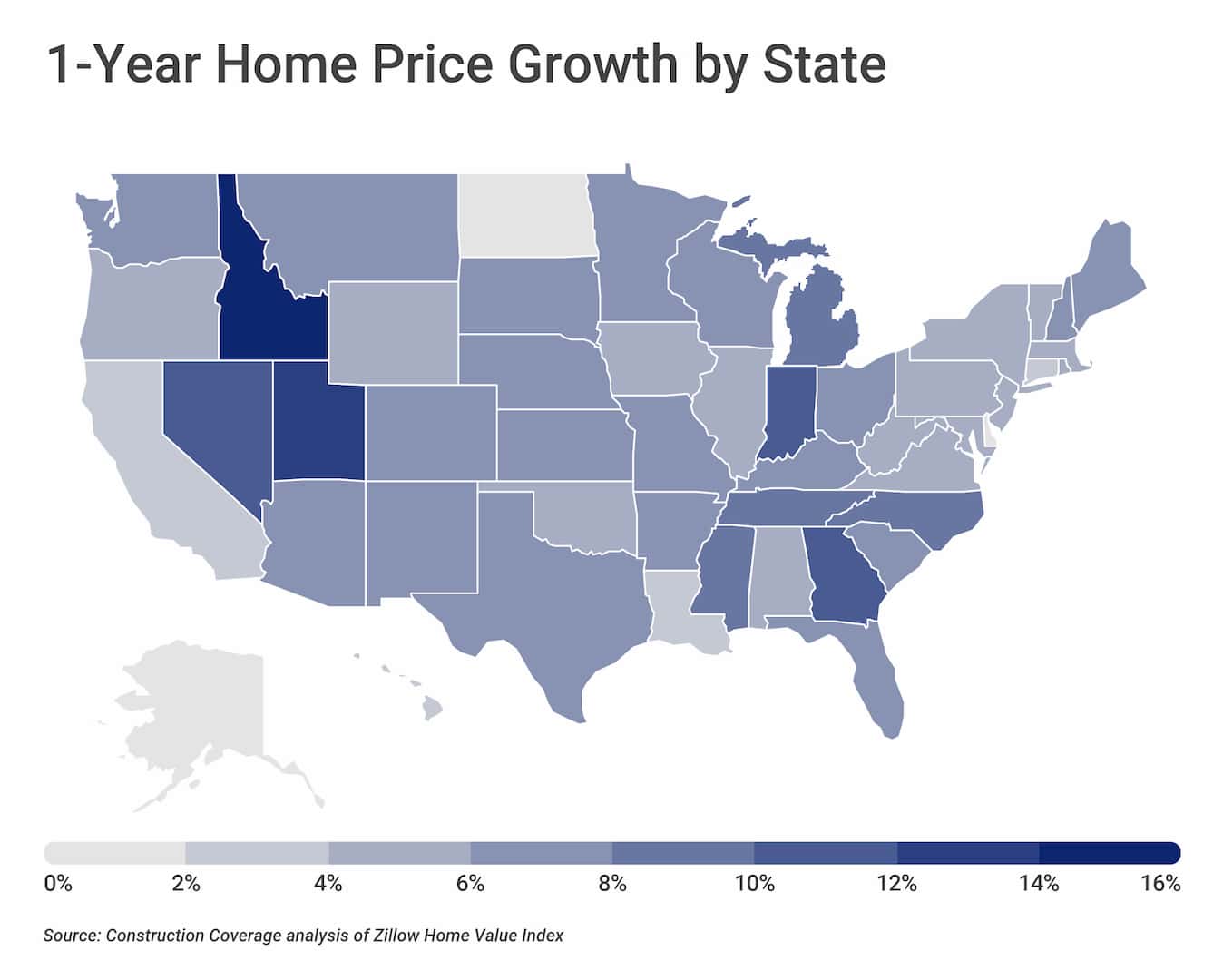 There are three markets on the above list that we've had extensive experience with over the last seven years. We've been investing in each for quite a while now, specifically in the new-build fourplex space, so we wanted to dive into the rest of Zillows data and include some highlights from our own research:

Market Report: [Download Here]
Rents in the Boise Valley have had a strong cycle of growth, culminating this year in what is poised to be the best year of rent gains yet. This trend has been bolstered by a healthy and expanding economy in Boise and Idaho as a whole, as evidenced by some of the strongest employment growth in the country.
The submarket, home to the downtown retail district, contains many attractions, such as Boise zoo, CenturyLink Arena, and the Boise Art Museum, as well as the Boise VA Medical Center. Roughly 41% of the population rents rather than owns, the highest percentage in the metro and possibly the result of home prices that average $230,000—nearly 35% more than those in the rest of the metro.​
In Nampa, households earn a median yearly income of $45,404—while average household expenditures average $46,658—keeping many individuals and families in multifamily rental units for longer periods of time. Nampa is located about 20 miles west of Boise along interstate 84. It's the principal city of the Boise-Nampa Metro area (Idaho's largest metropolitan area), and is centrally and ideally located to reach all the western U.S. markets. The entire area has proven to be a great place for the Fourplex Investment Group, as we now have properties in both Nampa and Meridian.​
The metropolitan area itself has a population of around 227,000 people, and boasts the following rental stats:
Recent Boise-Nampa Metro Articles: Home Buyer Migration Trends (Boise Ranked #1), Top 10 Stats for Boise Metro, 80+ Jobs coming to Nampa as manufacturer relocates from Spokane, Nampa, Idaho has a New Largest Employer!, 2 Fastest-Growing Cities in Idaho, Boise Valley Rent Trends [Fall 2019], Recently Sold Boise-Metro Multifamily

"The state of Utah has experienced significant population growth in the last few years, with much of this growth concentrated in Salt Lake City. Along with population growth, Utah’s low cost of living and Salt Lake City’s business-friendly environment keep demand for homes high while supply has struggled to keep up."
With land prices rising throughout the Wasatch Front, development continues to shift toward the western part of Salt Lake County. With the establishment of the Inland Port Authority, the Northwest quadrant of Salt Lake County is poised for growth. Amazon.com and UPS are both near completion on massive regional facilities, projected to bring in 3,000 new jobs between the two of them.
All this combined with the expansion of the Salt Lake City International Airport make this an area in need of housing.  According to CoStar, "only one project has delivered in this portion of the valley since 2015 and vacancies continue to be well below the metro average.  With nothing currently underway, tight conditions look set to persist in the near term."
Recent Salt Lake County Articles: Top 10 Stats for SLC Metro, Utah Housing Prices on the Rise, Amazon Building 1,000,000 Sq-Ft Facility in West Jordan, UT, Recently Sold Salt Lake Multifamily, New Salt Lake City Airport

Provo represents the core of the Provo-Orem metropolitan area within Utah County, which has a combined population of 617,678 and is located directly south of the Salt Lake Metropolitan area. The Provo metro boasts an impressively low unemployment rate of 2.8% as of Feb. 2019, (according to the Bureau of Labor Statistics). In fact, from Feb. 2014 to Feb. 2019, unemployment in the Provo metro area has averaged just 3.1%. This has lead to increased rents and decreased vacancy rates across the board.
​
The Provo-metro is experiencing massive population growth due to in-migration and a large natural birth rate, making it the youngest population in the country. Increased expansion in the technology sector along with two large universities are expected to lead to continued profitability in the multi-family investment sector. Provo has really shown itself to be an anchor in the fourplex investment space.
We expect a lot of Provo's growth to continue moving southward in the county toward Payson. Payson, UT is located on the South Side of Utah County and is poised to take advantage of the growth pressing along the I-15 corridor. “The metro’s population rate rose 1.4% in 2017, double the national rate. Boosted by prolonged demographic and economic expansion, demand is bound to remain strong, particularly for workforce housing, as 40 out of 45 multi-family projects under construction in the metro are Lifestyle segment.” (Yardi Matrix)
Recent Provo Articles: Utah Housing Prices on the Rise, Provo's New Medical School (Opening 2021), Recently Sold Provo Multifamily, Top 10 Utah County Stats, Qualtrics Doubling Size of Utah Headquarters

Each year, the Fourplex Investment Group releases new multifamily projects in a variety of markets. Joining FIG's investor waitlist is the easiest way to grow your portfolio before reservations fill up... 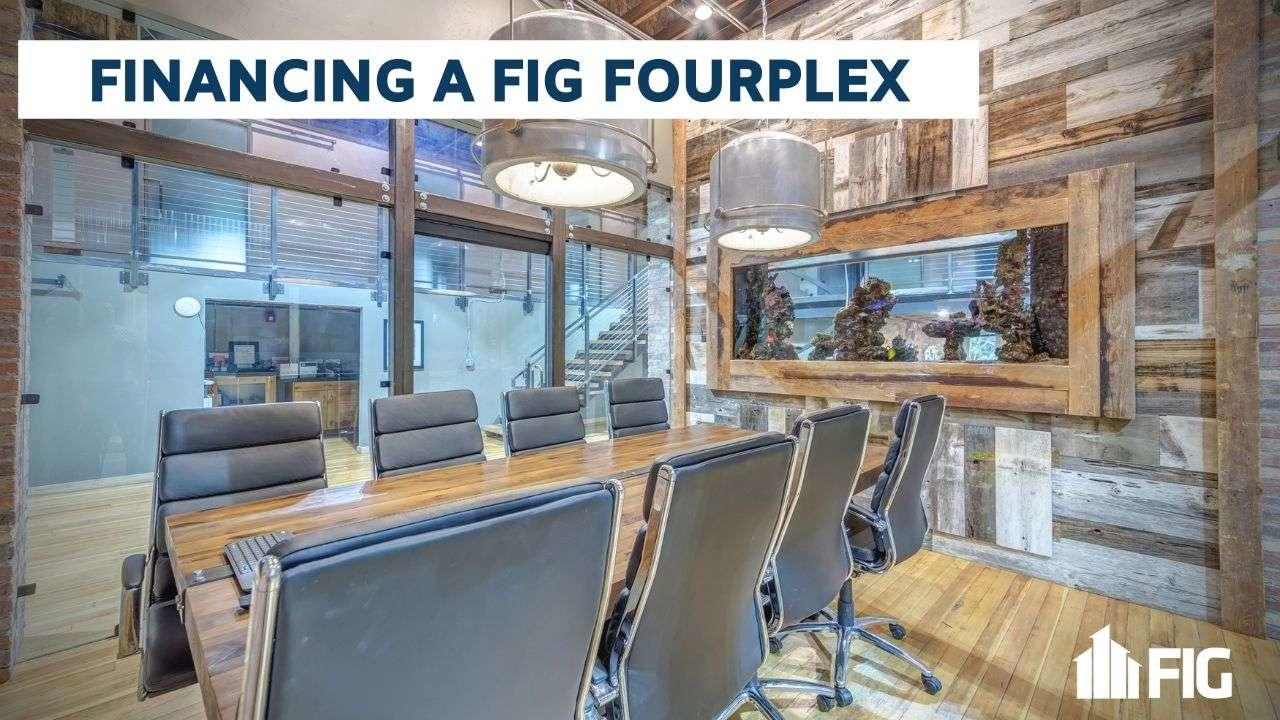 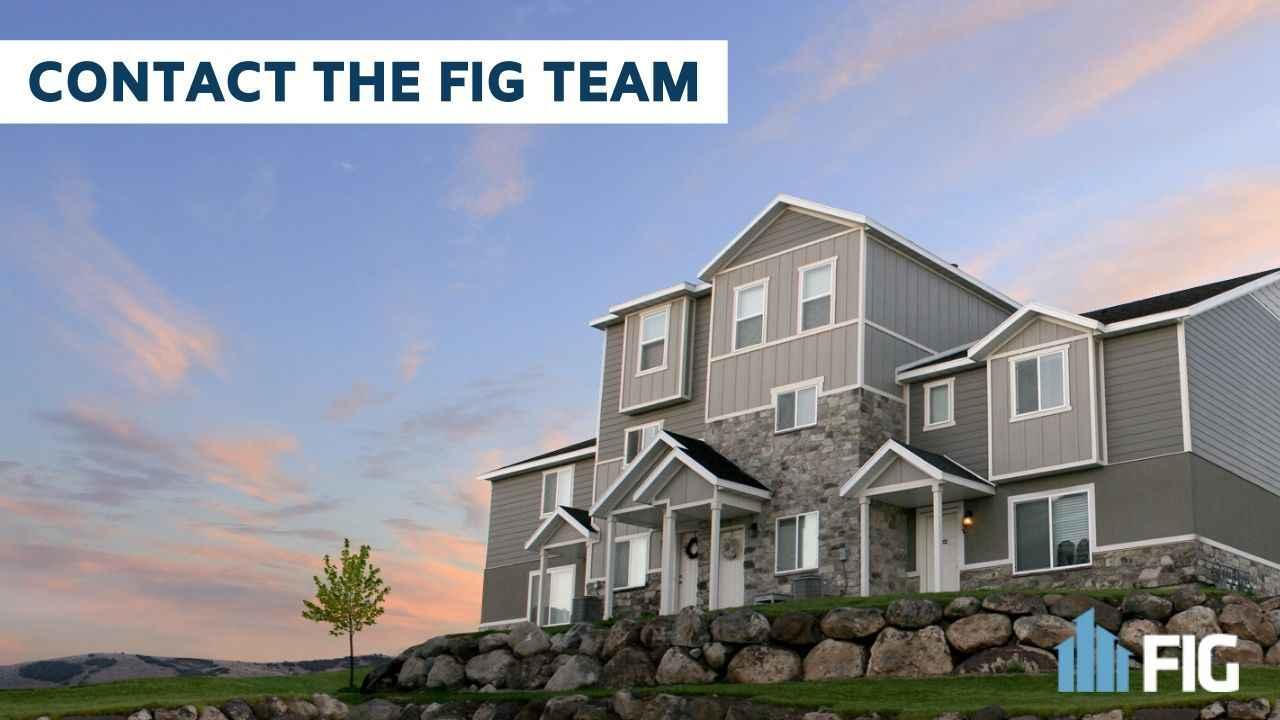 Be the first to know about our next build and early bird pricing—before we hit the open market. 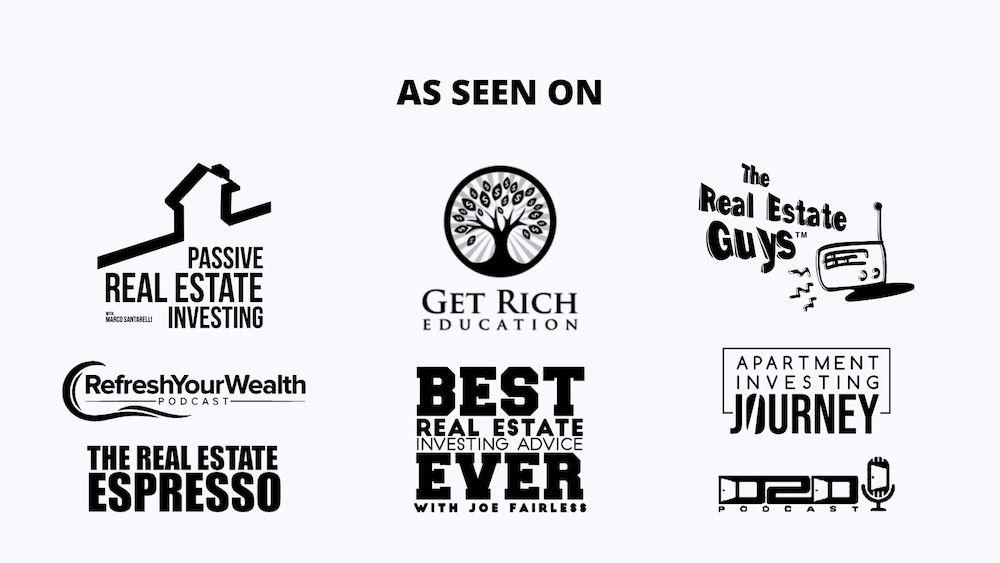 Each year, the Fourplex Investment Group releases new multifamily projects in a variety of markets. FIG's waitlist is the easiest way to grow your portfolio before reservations fill up.